skip to main | skip to sidebar

After the death of Bahadur Shah in 1712, it is said, "no member of the house of Timure remained in india, who was fit to take the helm of the ship of the State, which soon drifted on to the rocks. The degraded wretches that polluted the throne of Akbar deserve only a passing notice, the rest of our history is filled with the tragedy of disruption of the splendid edifice reared and fostered by the great Mughals". Farrukhsiyar was deposed, imprisoned, blinded and ultimately killed in an ignominious manner in April, 1719.

Muhammed Shah, the eighteen year old grandson of Aurangzeb was put on the throne in September, 1719. According to Sir Jadunath Sarkar, though Muhammed Shah "was a mere cypher in 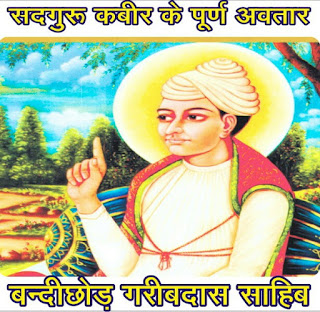 respect of public duties, there were some redeeming traits in his private character. Naturally timid and wavering, he was also free from insolent pride, caprice and love of wanton cruelty. He never gave consent to shedding blood or doing harm to God's creatures. During his reign, the people passed their lives in ease and the empire outwardly retained its dignity and prestige. The foundations of Delhi monarchy were really-rotten, but Muhammed Shah by his cleverness kept them standing. This Emperior heard of the immense popularity of Garib Das and sent one of his Hindu ministers to invite the Saint to the court. When the Emperor's envoy met Sant Garib Das, he said: "Only two types of people go to the court. One are those who commit crimes and seek the pardon of the king. Others are those who seek power and position through flattery. I do not belong to either of the two classes." So saying, Garib Das refused to go to the court of the Mughal Emperor.When the Emperor came to know about it, he wrote a polite letter requesting Sant Garib Das to oblige him just by one visit. Garib Das agreed. He went to Delhi and stayed with sant Charan Das who not only entertained him but offered him an Angarkha as a gift which is still preserved at Chhudani Dham.
When Garib Das met the Emperor, the Mughal ruler was very much impressed by the Saint's simplicity and nobility. The sermon which Sant Garib Das delivered had great effect on him. The Emperor then sought the blessings of the Saint and begged him to pray for the stability of his kingdom. Sant Garib Das assured him that his rule would spread far and wide if he agreed to the following three conditions:
1. He must ban cow-slaughter.
2. He must keep only his legal wives and release all other women from the bondage of the harem.
3. He should not levy any tax on foodgrains.
Muhammed Shah might have agreed to one or two conditions, but the Saint did not know that the Emperor's rule was completely controlled by the courtiers. The Qazis were enraged at the thought of a ban on cow-slaughter. Fearing the Garib Dass may not influence the emperor in the wrong direction they persuaded Muhammed Shah to sign orders for his imprisonment. Sant Garib Das is said to have cursed the throne and the rule of the Mughal Emperor and escaped miraculously from the prision.
A year later Nadir Shah invaded and the rule of  Muhammed Shah collapsed . A famine es said to have raged in the country. There was great scarcity of food. once his disciple Santosh Dass sent with the saint a bullock cart full of barley for the people of Chhudani Dham but some robbers waylaid t. The leader of the robber imprisoned Garib Das ji. His disciples came and secured his release.Five days after this incident some unknown assailants attacked this leader of robbers and cut off his hands. He came to Garib Das ji for forgiveness. The Saint forgave him and gave him spiritual instructions.
This article is taken from the book "Sri Garib Dass" written by KC Gupta ji.

Posted by Sunil Kaushik at 4:24 AM