skip to main | skip to sidebar

सतगुरू ब्रहमसागर भूरीवाले महाराज जी के सेवक डाॅ. के. सी. गुप्ता (लुधियाना-पंजाब) का शोधपरक लेख:-
In the writings of Garib Das, “Metaphysics is subordinated to musticism”. The highest principles apprehended by pure reason are to be apprehended in mystic experiences. God is the Ultimate Reality. He is formless and hence all anthropomorphism is condemned. God is One and Absolute. All creatures and creation depend on the One God. He is the Lord of heaven and earth.
He begets not nor is He ever begotten. None can be compared to Him. In the entire Universe there is but One Eternal Lord. All things arise from the power of His action under the influence of His creative Will. Infinite are His names and endless are His universes of wondrous workmanship. At the time of Creation, there was only the one Absolute God. And all will dissolve into Him, at the time of dissolution. 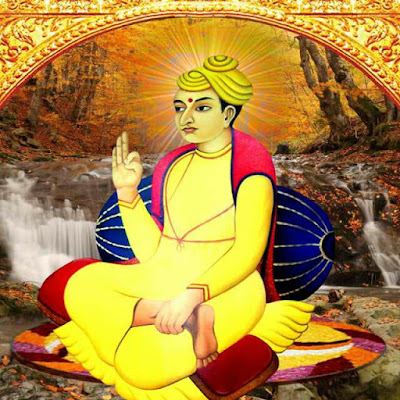 “He is One, Infinite”, says Garib Das, “He is Unseen, Unfathomable, without Support, Ocean of Mercy, Compassionate, Creator and Omnipresent. He is merciful and kind to the poor and humble. He can be seen within the heart. He is the Lord. He is the immortal Being and the all pervading spirit. From the Unmanifest comes the Manifest and in the Manifest is the Unmanifest and millions are His manifestations. The Supreme and Merciful Creator is seen in His creation. He is Unborn, Transcendent and without any from. The Creator is ever in His creation and the creation is the living form of the Creator. He is on the earth. He is in heavens. He is everywhere. The Unfathomable One is everywhere.” Sant Garib Das does not see God as an abstract nothing. To him God is Light (Nur). His light is like the blazing splendur of the sun. It is the light that shines in all souls and pervades everywhere. It is the light the vision of which alone dispels all inner darkness. The light of God is revealed in the Saints.
Says Garib Das : “Contemplate on the Divine Light which is the true breaker of bonds. The Inscrutable is a self-existent Light, which mysteriously pervades the earth, the waters and the sky. In this and other worlds there is but one light of God. Make Faith thy telescope and see His light in your own heart and in your own spiritual experience. The heart is the Temple of God which is light. God is self-absorbed in His light. He can be seen in the transcendent state. Fools in their ignorance cannot see His light. He has been realized by the Saints in the spirit of true Yoga. In the Sunya (Transcendent State), He can be realized. According to Garib Das this transcendent state of God, in which His light is revealed, is a higher spiritual state which was not achieved even by Gorakh and Dattatreya. “There the dhyana of Gorakh and Dattatreya does not reach. There only the supreme light of God Prevails.” Garib Das further calls it Nur Nagar, the City of Light. It is a state of Nirvana, a state which can be attained through the Satguru.  This Formless Light is Perfect, Ineffable, above all gunas, beyond knowledge (Jnana) and contemplation (dhyana). His mystery has not been khown by any of the great Sages like Narada, Sanaka, Sanandana, or even by the Sheshnaga. The object of our worship should be His light and not any gods or goddesses.
बन्दीछोड साहिब का ध्यान धारौ, निरालंब निज नूर निज नेक है जी।
जल थल मैं थीर गंभीर गैबी, देखो लोक परलोक मैं एक है जी।।
We should sing of the Divine Light. We should praise the Divine Light. We should perform the Arati of and worship only the Divine Light. Thus Garib Das concentrates on strict monism in his metaphysical thought and expression. Garib Das accepts the age-old belief of the Upanishads that all is He, manifested as the many, so that He may enjoy the bliss of reuniting all in the One eternal. God carries the four-fold function of creation, preservation and destruction and bestowal of grace. Souls in their essential nature are the same as God. The Nirguna and the Saguna is represented by such Upanishadic thoughts  :  “There is One without a second. All this is Brahman. There is the same relation between the
अविगत गति कुछ समझ पड़ै नहिं, क्यों पहुंचे मति मेरी। निराकार, निर्लेप, निरंजन, गुण अतीत तिंहु देवा।
ज्ञान ध्यान से रहे निराला, जानी जाय न सेवा। सनक सनन्दन, नारद मुनिजन, शेस पार नहि पावै।
देव ही नहीं तो सेव किसकी करूं, किसे पूजूं कोई नाहीं दूजा।                       दूजा कर्ता ही नहीं तो कीरति किसकी करूं, पिण्ड ब्रहमाण्ड मैं एक सूझा ।।
Transcendent and the Immanent Spirit as between milk and ghee or between water and the ocean. Garib Das saya : “Just as a bubble swells out of the ocean and merges back  into the ocean, so also the soul of man comes out of and ultimately merges into the Infinite Being. Only the Saints realize this, Just as there is fire in the wood  and can be taken out by pressing, just as there is butter in milk and can be taken out by churing, so also there is the spark of God in man and he can ignite it by meditation. He who realizes this is a Saint. Hidden in the soul of every man, God sees all and knows all. He watches all the game that he has himself started, and knows everything that  is going  on everywhere. Being one with each soul, He knows the needs of everyone and he hears the prayers of everyone. He shares everyone’s feelings. He takes part in the joy and suffering of everyone. He protects the Saints and punishes the evil doers. God a lone is Truth. Truth is the antithesis of falsehood. The Eternal Spirit of God is Truth. the world is false. In the beginning and in the middle and in the end, there was, there has been and there shall be Truth. Where there is Truth, there is no falsehood. Those who love Truth have no fear or delusion
जैसे पानी के बीच में बुद-बुदा होत हैं, फिरि पानी के बीच पानी समाया।

Posted by Sunil Kaushik at 7:17 AM